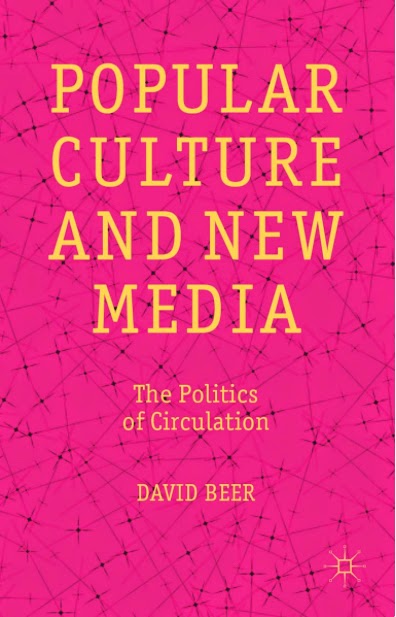 After I completed work on my book Popular Culture And New Media: The Politics of Circulation I kept an eye out for interesting examples of data circulations in culture. The book had argued that digital forms of by-product data fold-back into culture with transformative effects. The book suggested that there was a politics to these data circulations and that they were far from neutral. The central claim was that in order to understand contemporary culture we need to have conceptual and methodological means for understanding these data circulations. In that book I argued that we need to look at the devices and infrastructures through which data is generated, to look at the ordering powers of the archives that these data accumulate within, then to think about how algorithms filter and sort these data circulations and finally to consider how these data are played with and become part of bodily routines. The book also argued that before we might rush into analyzing and using big data to understand the social world, first we needed to develop a greater understanding of the data themselves. Following the publication of the book I noticed that I was gathering a lot of examples of data circulation in the sport of association football. It seemed that there was a powerful politics of data circulations in football that appeared to be reshaping its production and consumption. This observation became the starting point for the article that was recently published in Big Data & Society.

The article tries to reflect on the growing data assemblage in the cultural sector. Football became the case study for doing this. As well as thinking about the constitutive power of data, which I use the concept of 'productive measure' to open-up, the article also thinks about the way that data are involved in decision-making and organisational ordering. As I worked on the piece it increasingly came to focus on the emergent industry of data analytics. As a result, the piece shows how embedded data analytics are in the cultural sector and hints at the implications of the intensification of metrics in the coming years. The industry of data analytics and data solutions is really important in understanding how data becomes a part of culture and everyday life. In football there is already an established and sophisticated industry of analytics, with data analysis experts and packages that have the capacity to reconfigure the game itself as well as how it is understood. This industry of analytics is illustrative of a growing data assemblage bit it is also interesting to see how these analytics are described, marketed and presented. Here we might detect a discourse that promotes a ‘faith in numbers’, as Theodor Porter has put it, and possibly even a version of what Philip Mirowski has described as an embedded ‘everyday neoliberalism’. The article argues that it is important to understand the materialities of the data infrastructure but that we should also think about the way that this industry imagines the power of data and data analytics. These imagined powers are also a part of the data infrastructure and a part of how data processes become embedded in our lives.

Hopefully the article and the concept of ‘productive measures’ it develops will open-up questions about the integration of big data into culture. This is an area that I think still needs quite a bit of development in terms of our understanding. The article focuses on the analytics industry but it also has some illustrations of the way that the presence of data changes the very making of culture – from where to pass the ball, to decisions about players worth, to the assessment of values skills, and so on. The concept of productive measures aims to extend the existing literature on the way that data enacts the social world, in particular it aims to think through the productive power of measures as they come to shape and reshape the production, consumption and value of culture. Football becomes the case study in this instance, but it is used of an illustration of a broader set of processes. The article is intended to continue the project of rethinking the culture as it comes to be implicated by circulations of big data. The objective of this particular article is to think about how the analysis of the metrics that are generated might shape the cultural forms we consume, but my hope is that it develops a concept that might be used to think more broadly about the productive power of metrics as both a material presence and a set of imagined possibilities.

David Beer is Senior Lecturer in Sociology at the University of York. His publications include Punk Sociology (2014), Popular Culture and New Media: The Politics of Circulation (2013) and New Media: The Key Concepts (2008, with Nick Gane). He is currently writing a book called Metric Power and co-edits the Theory, Culture & Society open access site theoryculturesociety.org
Posted by Ramon Amaro at 12:52